As part of the Channel 4 Diverse Festival Studio12 worked in partnership with 4Talent to deliver a spoken word workshop with the award winning poet and activist Asma Elbadawi. Asma’s workshop explored diversity in the TV industry and raised questions for the young participants: Are your voices represented in TV? Is Bradford represented on TV? What’s it like to be from Bradford? Studio12 worked in partnership with Mojo Film to turn their authentic voices into a film that truly represents young people from Bradford. To ensure a diverse range of voices were included Studio12 worked with Bradford Community Broadcast (BCB) to reach the Bradford Community.

“Our annual DIVERSE Festival provides a fantastic opportunity for the industry to come together and share experiences on delivering inclusion and diversity on and off-screen. We’re extremely excited to be holding the DIVERSE festival in Bradford this year, as we look forward to establishing our National HQ in nearby Leeds.” – Ian Katz, Director of Programmes, Channel 4 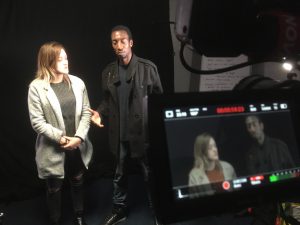 Asma shared some of her poems and work with the group of 18 young people, who were given opportunities to improve their writing and script editing skills. In addition they learnt how their voices can be turned into a powerful film seen by Channel 4 representatives and thousands of people worldwide via an online broadcast. The group were also able to attend the Channel 4 Diverse Festival Briefing: Driving Industry Voices to Encourage Real Social Equality.

“Such a pleasure to produce a film that allowed the citizens of Bradford to come together and to show the world what Bradford has to offer.” – Jamie Hutchison, Producer

“We created a film that symbolises Bradford working together as a city and to celebrate the city and its people… To create a visual journey showcasing the culture of Bradford.” – Rob Pritchard, Director

Are your voices represented in TV? Is Bradford represented on TV? What’s it like to be from Bradford?

Making of the Diverse Festival film working with a group of young people in Bradford.